The day I was almost killed by cows..... Bismarck-Mandan ND, Wedding, Birth and Boudoir Photographer

The day I was almost killed by cows....

Wait, WHAT? Did I just read that correctly?

You DID!! Let me tell you a little story of a great weekend that I shared with some great friends this last September (2014).

You may have heard of Damn You Auto Correct?! Well, as the 4 of us packed into the vehicle and got ready to head to South Dakota for our weekend photo workshop, I sent my husband a text message. I dont remember the exact message except the part where it had changed the F**k word to Chuck. As I was wiping the tears from laughter away, I finally caught my breath to read the message to my friends....and being the good friends they were, I was officially called "Chuck" the rest of the trip. "Hey Chuck, did you see this?" "Hey Chuck, are those your family members (passing cows, hardy har har)". It actually was pretty funny.

On our first morning, we were to all meet in the parking lot of the central location and find our workshop group and head to the destination. One friend, Ron, attended and on-campus workshop, while his wife Jane, Diana, and myself were attending a workshop at Sylvan Lake. Little did we know, two groups headed out at the same time and we had chosen the wrong group to follow and ended up going the wrong direction by about 30 minutes.

When we finally figured it out from our GPS telling us to constantly turn around, we finally did. We drove like crazy people to get to the location...I though maybe crazy Jane might hit 88 mph and take us somewhere in time. No such luck. We passed so many winery signs, it was looking like that was our cue to go there instead of Sylvan lake, and as much as we joked about stopping in, we pushed on. It was a good thing too, because the view at Sylvan was amazing!!

We spent the morning capturing all of its beauty. The light, the warmth, the quiet. As I was walking along the lake, I found a rock with a hole in it. It was so interesting to me, I just knew that I needed to find a way to capture it. I tried to shoot under, I tried to shoot upwards, finally, as I gave up and began to leave the location, I took a look back and saw an opening in the rocks just wide enough for me to fit. 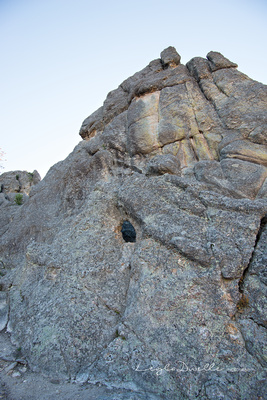 This was the image that I was able to see. It was a window, perfect in nature. 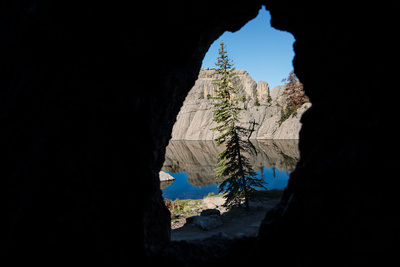 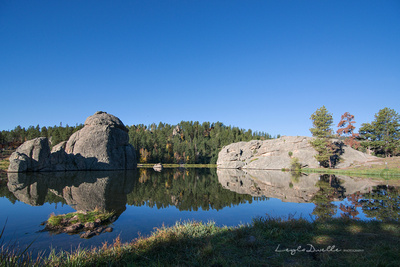 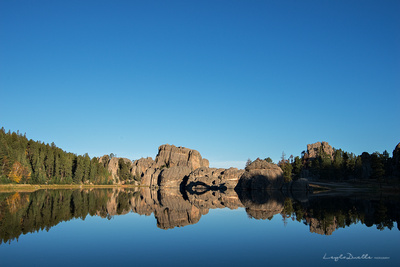 Once we finished with Sylvan Lake, we decided to actually go to the wineries that we had seen along the way. We enjoyed some fun times tasting wine and visiting with friends. We may have gotten Chuck and the rest of us a bit tipsy...shhh. :) 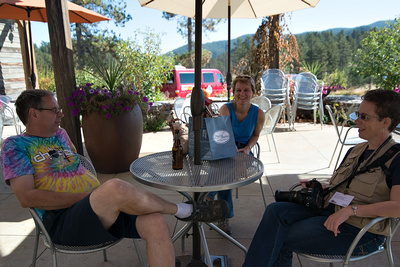 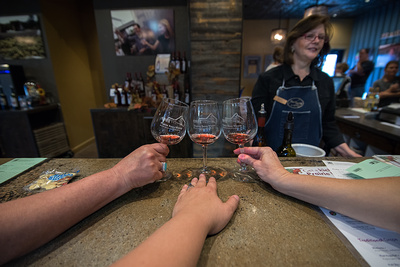 The rest of the day, we went on some back roads tours of the Black Hills and got to see amazing things....

That night, we all met up with the rest of the photographers and had dinner and drinks. The 4 of us were sooooo exhausted. We were on our way back to the hotel and talking about how we couldn't even stay awake to shower. It was like 2 AM and we couldn't even speak (the alcohol may have played into that :) ). I looked down at my phone to see the time, and started laughing hysterically. Like, I couldn't catch my breath. They all asked "What's up, Chuck?" and I laughed even harder. Finally, when I caught my breath, I was able to still squeak out, "Its only NINE PM!!" That really set us all into fits of laughter. Were we really THAT old?? lol.

We woke up the next morning for another LONG drive to the Badlands. I have to say, I liked the structure of the Badlands in SD, but I like the color of our Badlands in ND much more. We were freezing and there wasn't much that was eventful, until we left the location we were in. My friends and I got adventurous and while everyone followed the path up top, we searched for a way down... 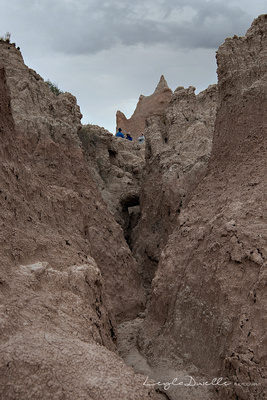 It's a good thing we did. We were able to find things down there, it was a great time for macro!! 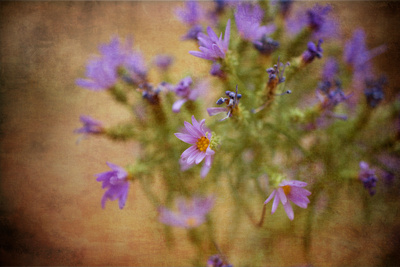 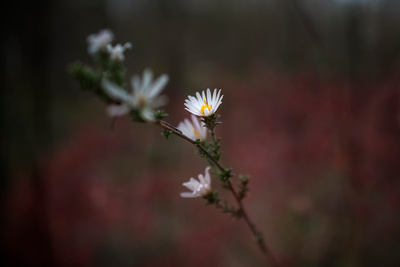 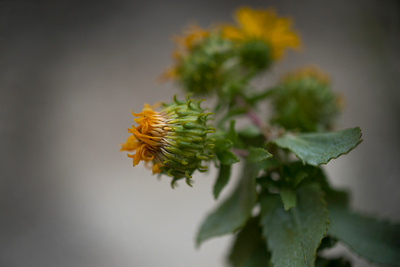 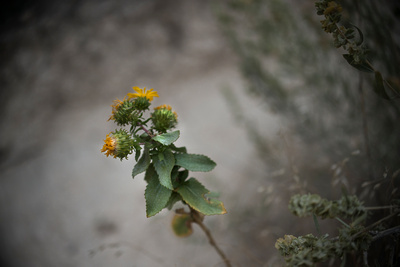 Our trip was just about finished. We had one more workshop to do. This is the day, this is the time I was almost killed. Jane and I were the only two from our group of 4 on this particular workshop. The instructor showed us a few places to watch for and get some good photos. Most of the group headed down the road to the bridge, and Jane and I stayed further up the stream. Leave it to Chuck to be backwards and stray from the crowd. After Jane and I had gotten the shots we wanted, I stopped to take a macro shot of a flower and she decided to head down to the bridge, or so I thought. 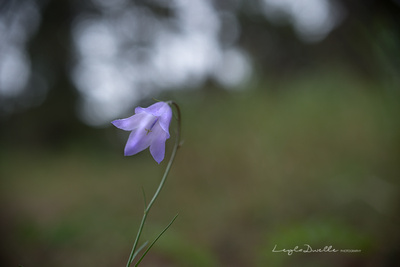 I finished up with the macro shot, and headed to the bridge, only to find that there was no one around me. So I stayed for a few, tried to get some shots, and decided to head back to the original location where everyone else was going to be. I was walking up the hill, in the middle of the road. On one side was a drop off down into the stream, and to the left of me was an embankment leading to higher ground. It was steep. The road was the best, until I heard it. At first, I was wondering if they had seen an animal doing something cool or something because I could hear all this hooting and hollering. Then, I saw it......A CATTLE DRIVE!!! Down the middle of the road! WTH? Where was I going to go? I was NOT going to be trampled by cows!! Really? That was the story of my life? "Poor Chuck, she was killed by cows on a photo workshop". Nope, not me. So I scrambled up the steep embankment on my left and not a moment too soon. Those cows came down quickly and started right AT me!! Just LOOK at the contempt on her face!! Clearly I was marked for death!! 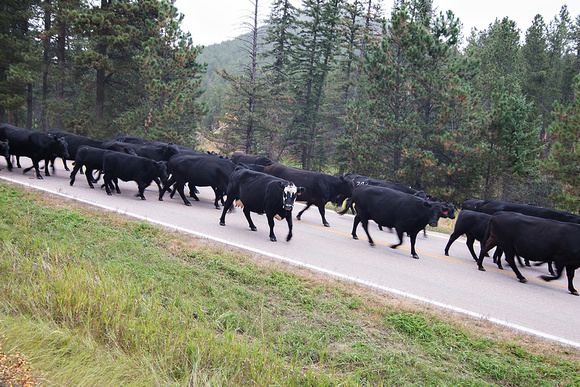 Once they passed me, I safely climbed down the side (It doesnt look that steep, but it really was). I walked up to the meeting place to find that my friend was up finishing her photos. I was laughing, out of breath, and she asked me, "did I hear COWS?" I told her, "Yes!! OH MY GOSH!! They came down the hill, I had no where to go, I was almost killed, I was almost ground Chuck!!"

Im glad I survived that whole ordeal! I wonder what the next trip will bring?